The Democratic Republic of Congo today, according to the European Commission

We might be only drops in the ocean, but there’s only one thing we know for sure: the oceans is made of drops! So we don’t care if, according to the European Commission, the Fondazione Cariello Corbino, chosed to work in the area with the largest humanitarian crisis of the planet: the Democratic Republic Of Congo. 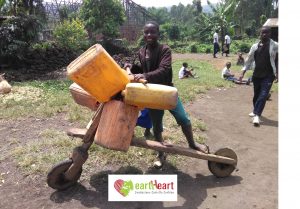 A chukudu, the typical, indispensable, wooden scooter of DR of Congo

According to the “EC – European Civil Protection and Humanitarian Aid Operations report” – 12 January 2018 update,  “2017 was one of the most violent years in DRC’s recent history, with ongoing conflict in the Kivu region, renewed fighting inTanganyika and a new and brutal conflict in Kasaï. The number of Congolese forced to flee from their homes has reached 3.9 million, the highest number of internally displaced people in Africa. In July 2017, the EU released €5 million in emergency aid for the victims of violence in DRC’s Kasaï region”.

“What are the needs?
Comparable in size to western Europe, DRC is one of the world’s poorest countries despite its vast natural resources. DRC’s complex humanitarian crisis is characterised by conflict, mass displacement, malnutrition and epidemics. In addition to millions of displaced people, DRC hosts over 526 236 refugees from neighbouring countries.
Kivus and Ituri provinces have been the scene of fighting for over two decades. More recently violent clashes have erupted in the Tanganyika and Kasaï provinces. The UN has warned that in Kasaï alone 3.2 million people urgently need food assistance and 250 000 children could starve without nutritional help. Stepping up aid to the victims of this one-year old conflict is a humanitarian imperative in this region which was already extremely fragile before the crisis. In Kivus and Tanganyika, regular flare-ups of ethnic tension, violence and arbitrary killings continue to cause untold suffering.
Millions of displaced Congolese are in need of shelter, water, food assistance, nutrition, health care and education. Due to extreme poverty and a crumbling health care system, DRC’s population is highly vulnerable to acute malnutrition and disease outbreaks such as cholera and Ebola. In 2016, 14 million malaria cases were recorded and 1.9 million under-fives are expected to suffer from severe malnutrition in the course of 2017″.

The Fondazione Cariello Corbino is trying to save and change the lives of “only” 64 orphans in Nord Kivu and again we stand tall and repeat “we might be only drops in the ocean, but there’s only one thing we know for sure: the oceans is made of drops!”